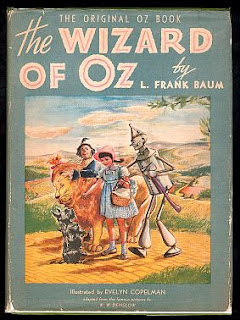 I grew up with the 1944 edition of The Wizard of Oz, illustrated by Evelyn Copelman. I think this was the first unabridged edition to use new illustrations, and the title page claims that they were based on the original W. W. Denslow drawings. I think the MGM film had a stronger influence on the drawings than anything else, and some incidents are independent of any influence. A later edition added more illustrations to the book. I used to get this version out of the local library frequently, much to the confusion of my family. I don't think they realized the reason - more pictures! 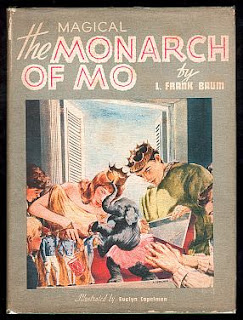 When I first saw the original Denslow illustrations, they struck me as very odd - I was so used to this version of the story. I still have the original copy that I read; it was already worn by the time I got it, and is now a pretty decrepit book.

Copelman also illustrated a new edition of The Magical Monarch of Mo. Both of these titles were published by Bobbs-Merrill, who still had the rights to a number of Baum's early titles.
Posted by Bill Campbell

I too am a collector and am writing about Oz illustrations. I wonder if you've found in your collection any truly creative, innovative illustrators in the 1950s 1960s or 1970s? The ones I see during those years all keep to the Denslow-Neill-Copelman tradition, which is grand, but I don't see any who break out into new interpretations until the 1980s. Do you? Would love to chat! Thanks, Lyn Lacy, Hendersonville NC

The best place for more unique interpretations tends to be foreign editions, which I haven't collected - but there are a lot if them out there!

Hi again. I've got a new lynlacy.blogspot.com where I'm writing about children's classics, first article the Tin Man. Please share for me? Thanks. Lyn Lacy