Here's another interesting little group of Oz stage photos, once again from the New York Public Library. These are all labeled Boston in the photographers stamp, and it's possible that they may be from the Castle Square Theater production of the show, which debuted in that city in 1911.

Here we have Dorothy, and the Cowardly Lion (who was played by Arthur Hill, the man who created the role in the original Chicago and Broadway productions). A 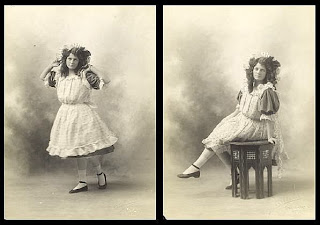 song was added for this production, called "Fraidy Cat" and sung by Dorothy in the third act. Maybe these photos relate to that song? In the library files these are all archived with Babes in Toyland, so it's really anyone's guess. (An update, 10 years later - the character shown with the Cowardly Lion is Bardo, the Wizard’s assistant. David Maxine is currently writing an excellent blog on the subject of The Wizard, which can be viewed here - https://www.vintagebroadway.com/ )

I think I remember someone (maybe David Maxine, but I'm not sure) saying that the song "Fraidy Cat" really didn't have anything to do with the Lion, despite the fact that you'd think the connection would be obvious.

You're probably right - it just seemed like the photos would be such a nice fit! I don't know for certain whether they're even from the Castle Square production, but they are fun to see.

In the 1903 issue of Everybody's Magazine Volume 9,page 791 on googlebooks they talk about WOZ and have a pic of Anna Laughlin as Dorothy and state that in Oct 1903 the show departed for Boston after running for 37 weeks at The Majestic.
I have found 2 magazines that have pics from the 1902 Chicago production. One is The Theatre Aug 1902 on archivedotorg and the other is Philharmonic Aug 1902 on googlebooks. Both magazines show John Slavin as the Wizard. In one pic he actually looks like a wizard and the other pic he is dressed in the kilt outfit like we see in the famous poster.
Also, I would assume that any photos that say Windeatt would be from the original Chicago production.
Sadly, Anna Laughlin committed suicide in 1937.

One more comment, Babes in Toyland also started in Chicago before NY (as did many others) so not all of the Windeatt photos would be from WOZ (on the NYPL website)