Last summer, I mentioned that an upcoming project for me was to produce a stained glass window based on the 1930's Oz mural painted by John R. Neill for Marie and Elgood Lufkin. In a nutshell, it hasn't happened yet! Between moving our studio this spring, and playing catch up since then, the time just hasn't been available. But, I do hope to get started and produce something within the next year.

Whether the actual painting still survives is something I've been unable to find out. I did contact the Lufkin family, but they were unable to help. Marie Lufkin had 3 children by an earlier marriage, and that particular branch of the family seems to have slipped off the radar. 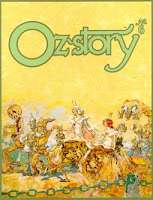 The best image of this painting is a nearly finished sketch featured on the cover of Oz-Story #6, published by Hungry Tiger Press. It was also featured in the article on Neill's work published in the Summer 2006 issue of Illustration magazine, but the picture is a bit murkier and not as crisp as the Hungry Tiger printing. This original sketch is still in the collection of the Neill family. Aleph-Bet Books is offering a set of additional sketches for the painting, but none are as finished as this particular piece. In the final painting, Glinda's head was turned to 3/4 view, and her face was a portrait of Marie Lufkin. The only photo of the finished mural that I know of is a not very good black & white picture in the Spring 1965 Baum Bugle. 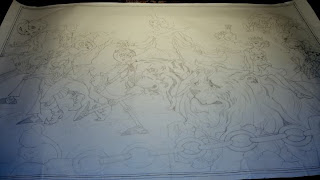 Currently the window only exists as an unfinished cartoon that I have been working on, for building the final piece. But with any luck, some progress will be made before long. The intention is to place the final window into a window seat in the converted attic of our house. 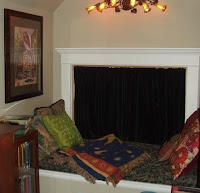 I am also a Oz enthusiast. Love it