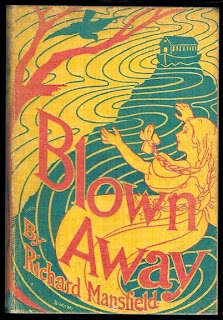 Unfortunately, the book is not particularly good and, like so many of the period, owes a large debt to the Alice books of Lewis Carroll. If anyone cares to attempt it, the text can be read online here. The cleverest part is the wonderful Art Nouveau binding which, when opened flat, forms a nearly symmetrical image showing both girls being swept up in the wind!
Posted by Bill Campbell

Very cool. That cover is gorgeous! Shame that it sounds like the text didn't impress you as much.

Interesting. Is that Noah's Ark in the background of the front board?

Thanks for pointing this out! I think Rebecca Loncraine's Baum biography mentions the motif of travel by cyclone was in the air (so to speak) at the turn of the 20th century, but I don't have her text at hand right now.

Yes, that is Noah's Ark - one of the characters they meet is Mr Noah, of the wooden toy variety, and his animals perform for the girls.