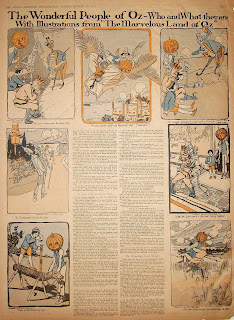 The story summary given is interesting, as it seems to imply that the comic adventures take place during the time of the character's escape from the Emerald City in the Gump. Of course, this doesn't make sense in terms of story continuity, as Tip is not included in the comic pages. I don't know if this page was written by Baum - I suppose it may be. References are made to the stage show of The Wizard of Oz, and the siege of the Emerald City is compared to the Russians at Port Arthur!
Posted by Bill Campbell

Nice! Man, I wish this had made it into the recent Sunday Press book!