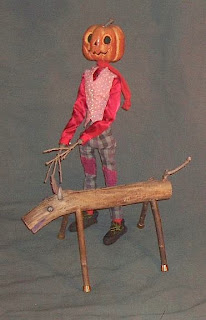 I'm afraid my postings have been pretty sparse lately, but it's easy to chalk that up to the busy time of year!

Here's Jack Pumpkin- head and the Saw- horse, complet- ed and ready to join their other Ozzy friends. In keeping with trying to create these characters more or less as described in the Oz books, both have been made from found sticks and branches. Jack is pegged at his joints which does make him a bit awkward - and it was a bit of a trick to dress him! As stated in The Land of Oz, the Scarecrow will bend, but not break, whereas Jack will break, but not bend.

The Sawhorse is shown above in a more natural state, but here he is in saddle regalia - ready to trot through the Emerald City! 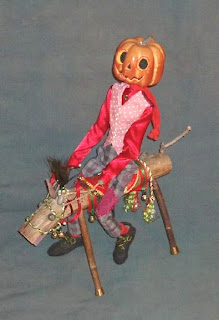 These are wonderful! I've been toying with the idea of trying to create some Oz figures from polymer clay and your figures have gotten me excited about actually trying it. Now if I can only find the time. Anyway, great work!