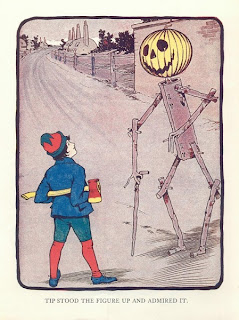 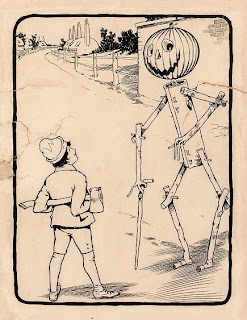 Congratulations---it's magnificent. And thank you---I think it's so cool that you share your finds with your readers.
Jack's face looks friendlier in black and white---his eyes aren't as cavernous and spooky. He's more like the sweet, goofy Jack fussing about his head spoiling and less like Halloween.
It's a great piece.

Thanks! And you're right, Jack looks more ominous in the color plate with his dark eyes and nose - it's as if the spark of life is missing, which is quite appropriate! The same image of Jack was used in black & white on page 14, an example of filling space in the book with details from larger drawings.

This piece came from the collection of Robin Olderman, a long time Oz collector who sold her collection at auction this past summer.