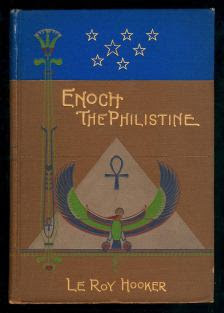 Here are a couple covers by W. W. Denslow with an Egyptian theme.

The first is Enoch the Philistine, which gives us a rather religious explanation of the building of the Great Pyramid.

The second is In the Shadow of the Pyramids. I have attempted to read this book, but so far have been unable to finish it. Through what I can only assume is very poor editing, practically every sentence ends in an exclamation mark! It's very difficult to read something written that way! Especially

when the text has nothing exclamatory about it! You get the idea! I've never read anything else by Savage, so I don't know if this is a style he pioneered, or if it was simply accidental. At any rate, I find it unreadable.

The two covers make an interesting contrast with each other - Enoch plays with emblems and design elements much more than Shadow, which has a very atmospheric image. Both covers bear the seahorse signature. Incidentally, Denslow also used an Egyptian idea in one of his final published pieces, a cover for the old Life magazine in 1915.
Posted by Bill Campbell