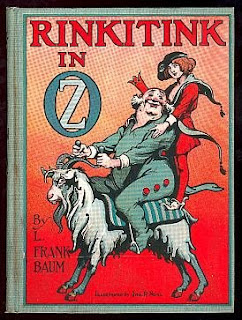 Rinkitink in Oz was the last of the L. Frank Baum books that I read as a kid. Maybe this is why it never felt as much a part of the series to me. Of course, the other reason might be that it only nominally takes place in Oz. The book was actually written much earlier in Baum's career as King Rinkitink. This was never published, and eventually he dusted it off and made some adjustments and published it as Rinkitink in Oz.

The interesting thing about this is that King Rinkitink was written before Ozma of Oz. Baum seems to have borrowed heavily from the unused plot for the plot of Ozma. Then, after the success of the stage version of The Wizard of Oz, Baum was determined to exploit his books and turn them into stage extravaganzas. His adaptation of The Land of Oz, called The Wogglebug, was a flop. Ozma of Oz was written and re-written and eventually became The Tik-Tok Man of Oz, and was reasonably successful. This show formed the basis for the book Tik-Tok of Oz. So, between Ozma, Tik-Tok, and Rinkitink, Baum pulled three books out of the same story - not to mention a stage production! I think that's doing pretty well.
Posted by Bill Campbell