L. Frank Baum wrote two alphabet books, The Army Alphabet and The Navy Alphabet, both published in 1900 by the George M. Hill Company. I have a copy of the Army, but so far the Navy has eluded me. As always, it's a matter of the right book at the right price at the right time - a tricky combination to line up!

Both of these titles are large books, bound in paper covered boards. As usual with this style of binding, copies in good condition are difficult to find - the covers suffer a lot of wear over the years. 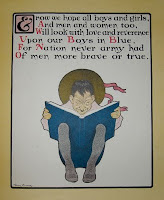 Nice! They reprinted "The Navy Alphabet" recently (but I know, you collect first editions), and I own it, but I would love to see the other one.

If you don't mind a cheap, recent reprint of The Navy Alphabet, Applewood put it out a few years ago. Take a look at this here Amazon link for the details. I just wish they'd do a matching reprint of The Army Alphabet, since we can't all afford the originals...

Thanks! I've been considering the reprint, as a way to fill the gap. We're lucky currently, there are quite a few rare titles available in new printings from various sources - Hungry Tiger Press, Lulu ( through Marcus Mebes), etc. It's a big help for someone eager to read other works by Baum.

I don't know about the "Army Alphabet",as I haven't seen (so far) any variations on the artwork, but the "Navy Alphabet" had 2 distinct printings. On the cover of one, the turret & corresponding trim are brown, and the book has a blank page exised at the printers (on ALL copies seen so far), while the second the turret & trim are gray, with 2 blank pages in the rear. A salesman's copy for the 2 books recently appeared, the gray was on the sample cover (inserted the back of a "Army Alphabet").

I always find variations like this fascinating. It adds a little extra to the challenge of locating copies of the books.