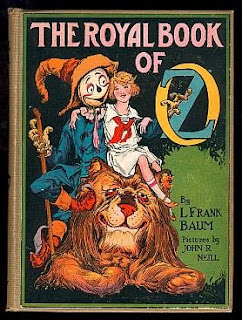 The Royal Book of Oz is the first Oz title written by Ruth Plumly Thompson. I didn't read any Thompson books until I was an adult, as they were not available when I was reading the rest of the series as a kid. When I did start to read them, I found the difference in authors a bit of a jolt. I've heard this happens to a lot of people, but if you read the Thompson titles as a kid they blend more easily with the earlier stories. I'm very fond of the Thompson books, they just feel like Oz through a slightly distorting lens.

I have a little more of a problem with this particular book than with her other titles, because I'm not terribly fond of the whole premise of the story. It involves a rather far-flung explanation of why the Scarecrow originally came to life. Still, the series was successfully continued and Thompson became the new Royal Historian of Oz.

This book is credited to L. Frank Baum on the cover, and Thompson isn't mentioned at all - however, it was entirely her own work. Several of Thompson's cast of new Oz characters are introduced in this book.
Posted by Bill Campbell