I am aware of approximately 170 surviving pieces of published Oz artwork by John R. Neill. There are also a number of unpublished pieces, sketches, etc. I know that's not a complete number, but even if it were doubled - which seems unlikely - it would be a far cry from the amount of work Neill did for the series. He illustrated 35 Oz books, plus the Little Wizard series. Early advertising for the Oz books states that each book has over 100 illustrations - some have quite a few more - so out of over 3500 pieces of art, the number of surviving pieces is really quite small.

One of the largest archives of remaining Oz artwork was sold through Books of Wonder in 1984. Their Art of Oz catalog contains pieces that had remained in the publisher's files until that time. I still drool over some of the pieces in that catalog! 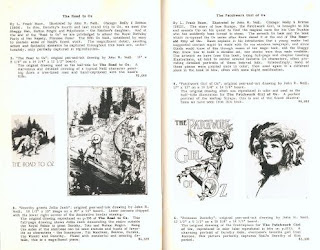 Illustration art was not considered of much value, in the not so distant past. I've heard stories, whether true or not, of Oz illustrator/author Dick Martin pulling artwork out of dumpsters after Reilly & Lee was bought by Henry Regnery Co. While it's difficult to believe that anyone would simply dispose of such wonderful things, it was common practice. Fortunately not everything was destroyed, so there are still original pieces to be enjoyed today.
Posted by Bill Campbell

Did you buy many of your pieces through that Books of Wonder sale? I would love to own some original Neill art someday. I've seen a few things come up at the couple of Oz club auctions I've gone to plus the things that his grandchildren have put for sale on the web though the pieces I was interested in unfortunately went beyond my budget.

The three drawings I posted from Grampa in Oz came from the Books of Wonder catalog - that was as much as I could manage at the time, although there were many pieces I would have loved to own. Otherwise, drawings have come from a wide variety of dealers and galleries over the years. There are a lot of pieces I've seen sell that were well beyond my ability to buy. I consider myself very lucky to have what I have!