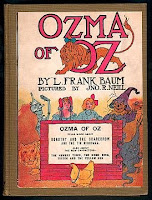 In 1929, John R. Neill created a new cover for Ozma of Oz . Reilly & Lee had been using the original Reilly & Britton dust jacket drawing as the book cover, and obviously felt it could use an update - the old cover was more of a publishers advertisement than an eye-catching image.

For the new cover, Ozma is shown pushing aside a set of curtains. Neill found curtains to be a useful device in a number of his Oz illustrations. These were effective means of revealing a character, or obscuring a scene. They obviously worked well, because I've always remembered these particular pictures.

In Ozma, Ozma pushes aside the drapes as she moves forward to make her final guess in the Nome King's room of ornaments.

In Tik-Tok, Betsy Bobbin and Hank the Mule are seen after their arrival in the Emerald City palace.

In Lost Princess, Dorothy is shown discovering the loss of Ozma and her magic tools.

In Magic, Ozma is pulling aside a curtain to enter on her birthday feast and presents.

In Jack Pumpkinhead, the Baron and his Princess are revealed.

And of course, the MGM film does have the famous line "Pay no attention to the man behind the curtain!"
Posted by Bill Campbell