Here are a couple odds & ends by John R. Neill. The Girl Graduate was published by Reilly & Britton and intended to be used as a school scrapbook. It's not an uncommon book, but this is the only copy I've run across with the Neill cover. This is taken from a finished watercolor, and is the only illustration he provided for this book. The other copies I've seen are of a later edition with a totally different cover design.

Bob Thorpe, Sky Fighter in the Lafayette Flying Corps is an adventure tale of World War I, with a cover, a couple full page illustrations and a number of small spot drawings by Neill. This was published by Harcourt Brace and Howe in 1919, and seems to be a bit difficult to find - at any rate, I haven't seen very many copies listed.

Another book with a number of illustrations by John R. Neill is From Pillar to Post, by John Kendrick Bangs, and published by The Century Co. Bangs was an author and humorist who traveled extensively on a lecture circuit in the early 1900s. In this book from 1916, he tells a number of stories and what might be called human interest pieces concerning his travels. The stories in the book were originally published as magazine articles. 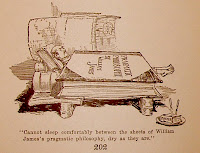 Neill provided 30 small spot illustrations within the text, but not in his fantasy style. There is one drawing that I particularly like that is a bit more fantastic, with people pressed in books.

The cover and jacket for this book were designed by the Decorative Designers, the same company that designed the floral borders on the Aunt Jane's Nieces series, and Sam Steele covers. I always enjoy finding connections of that sort.
Posted by Bill Campbell