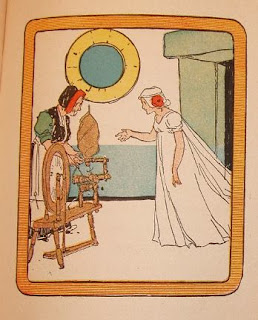 Sometime in 1907-1908, John R. Neill drew a set of illustrations for Sleeping Beauty for the Children's Stories That Never Grow Old series. These were originally published in the Philadelphia North American newspaper, and later as individual story books. 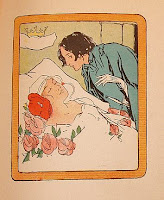 Ozma from the Oz series. The poppies in the hair, practically a trademark characteristic of Ozma, are present and make sense in this case. Poppies have long been associated with sleep and death, and the soporific power of the poppies tie in well with the 100 years sleep. In Greek mythology, Hypnos and Thanatos are twin brothers representing sleep and death - they are often pictured in conjunction with poppies. And L. Frank Baum made memorable use of this symbolism with the deadly poppy field in the first Oz book. 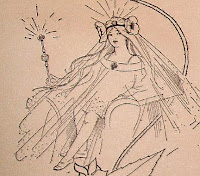 Neill placed poppies in Ozma's hair in his first illustrations of her, in The Marvelous Land of Oz, and continued to use them throughout the series. I wonder if his idea was to represent a reminder of her years under enchantment - either as years asleep, or dead to the world?

Interesting point about Greek mythology. A friend of mine helped me come to the conclusion that Baum must have been quite well-read in mythology, since so many similarities to them are found in the Oz stories.

The poppies in Ozma's hair I've always found curious. For some reason, they match her so well, but Baum never mentions them in any of his texts. (However, I did note that in some later work, "Glinda," for example, Ozma is without them.) As I've said elsewhere, sometimes the illustrator can tell more of the story than the author can.

I think poppies as head decorations were pretty common in illustrations of the time. Didn't Fanny Cory's drawings for YEW show the female form of Prince Marvel wearing poppies, or am I wrong?

That's true, flowers in the hair (poppies, lilies, etc,) were a common device in Art Nouveau images and sculptures. Most likely Neill was simply following the style of the times. And the fairy who becomes Prince Marvel does wear poppy-like flowers in her hair - interesting that she is never given a name as a fairy, just as a mortal. Maybe, with a stretch of the imagination, she could be Ozma prior to being left in charge of Oz by the Fairy Queen Lurline!

How much would you say the "sleeping Beauty" book pictured by John R Neill & Published by Chicago- The Reilly and Britton Co. Would cost?