Here are another pair of later books with illustrations by John R. Neill. 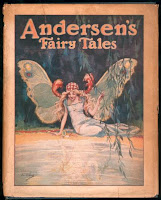 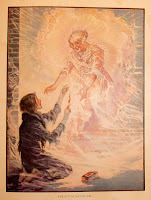 I've always thought this edition of Andersen's Fairy Tales was an odd book. It was published in 1922 by Cupples and Leon, and is illustrated in black and white by an unknown artist. Neill provided a cover and two color plates for the book, which strikes me as a strange number of color plates. One is used as a frontispiece, and the other is lost within the book. These were finished watercolors, and it would have been nice to see a more complete suite of illustrations for this title.

Another book to use Neill's illustrations was King Arthur and His Knights, published in 1924 by Rand McNally. This book takes the opposite approach from Andersen's Fairy Tales - the cover and color illustrations are by Mead Schaeffer, and Neill provided a handful of pen drawings - generally at the beginning of each "book" of the story. The drawings are vignettes rather than full scenes, but it's fun to see some Arthurian illustrations by Neill.
Posted by Bill Campbell

I actually bought that "King Arthur and his Knights" randomly years ago. When I finally got around to taking a good look at it I was thrilled to see Neill was one of the illustrators!

Thanks! I've been reading a lot of Anderson lately, I would love to have seen see Neill do a full set of illustrations for one of Anderson's more epic fairy tales like "The Snow Queen" or "The Nightingale." Or even one of his less child-oriented pieces like "The Shadow" or "The Wind Tells about Valdemar Daae and His Daughters."