Merry Go Round in Oz 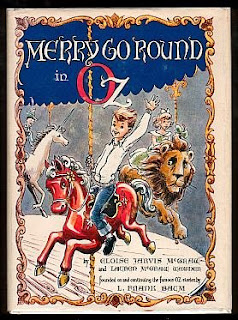 Merry Go Round in Oz, published in 1963, was the last of the Oz books published by Reilly & Lee, and the only one published in my lifetime - although I was too young to know anything about it! This was written by the mother and daughter team of Eloise and Lauren McGraw, and illustrated by Dick Martin - his first full length Oz book. In 1989, Dick Martin designed a new cover for the first reprint edition of this book.

By this point in the series, the variety of authors and illustrators involved in creating the books makes the late sequels feel a good deal less cohesive to me. I'll admit to preferring the earlier books, but it's still amazing to see what a long run the original book inspired. This title is the end of the forty book "Oz Canon", the run of books considered by many to be the Oz series. Quite a few titles have been written since, although relatively few have had widespread distribution. 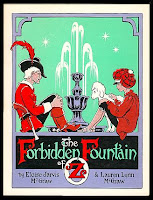 The International Wizard of Oz Club published a second Oz book by the McGraws in 1980, titled The Forbidden Fountain of Oz, again with illustrations by Dick Martin. In 2001, Hungry Tiger Press published The Rundlestone of Oz, which was Eloise McGraw's last book. This was illustrated by Eric Shanower.

I do like "Merry Go Round" and "Forbidden Fountain" (which was actually the first non-Baum Oz book I'd read) but "Rundelstone" really doesn't have the Oz-book feeling in my opinion. Similar to "Rinkitink," the story feels to me as if it may have been a non-Oz manuscript Eloise McGraw had lying about that she edited slightly and turned into an Oz book.

I believe "The Rundlestone of Oz" grew out of early material that had been dropped from "Forbidden Fountain of Oz"- so the original inspiration was certainly Oz-related. It just took a while to find its final form!

RUNDELSTONE does feel a bit more European than most Oz books, but that's more or less typical of McGraw. Her other two books used familiar characters throughout, however, while RUNDELSTONE only brings in Ozma and her entourage at the end. I like the story, but I can see how some might not see it as being all that Ozzy.