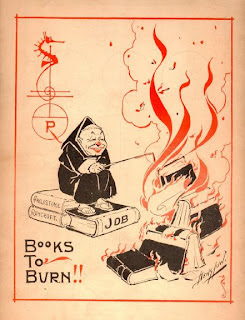 The Wonderful Wizard of Oz is an excellent example of an Arts & Crafts book. Just as architects and artists were seeking to create an American style, L. Frank Baum was writing his American fairy tale - and W. W. Denslow was designing it. This was a conscious attempt to break free from European traditions, and devise something new and original. Chicago was a center for the movement, so Baum would have been in the midst of new concepts.

Denslow was very involved in the Arts & Crafts movement of the turn of the last century. He worked with Elbert Hubbard and the Roycroft Shops, creating images for magazines and illustrating several of the Roycroft books. 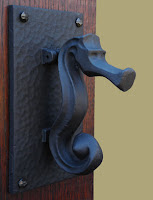 He found the original knocker, which was never put into production, and now offers reproductions in 2 sizes - the same large scale of the original piece, and a smaller version that is a little easier to use in today's homes. I have a large version, but so far have had no where to put it - I'll find a spot one of these days.

The two cartoons I'm showing are both from The Fra, a later magazine published by Hubbard. 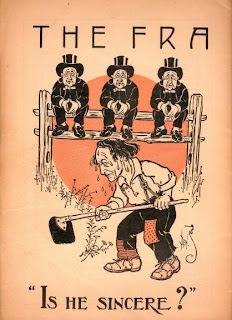 The original artwork for Is He Sincere hangs in the Elbert Hubbard Museum in East Aurora, New York. There is also a pair of the andirons in the fireplace.

The museum is actually a house that was meticulously outfitted in Roycroft pieces during the heyday of that creative community. The home's owners eventually gave it to the Roycrofters to serve as a museum. Of course, there have been additions and changes, but it remains basically a lovely, inviting home rich in Roycroft detail.

The Denslow artwork is on the wall as you go up the stairs.

I also stayed at the Roycrofter Inn where there was a video documentary about the Roycrofters in my room. I was fascinated to see -- to see repeatedly, thanks to rewind -- a deeply carved, three-dimensional wooden version of the Is He Sincere artwork. The camera shot was too tight to see if it was independently created as artwork, or carved into a larger piece as a front panel. It simply passed through the screen with no direct reference over some general commentary, and no specific mention of it was in the credits.

My visit (call it a pilgrimage) to East Aurora last October was really wonderful. I'd encourage any Denslow fans to make the trip.

How interesting - I hadn't heard of any carvings of that sort being done from Denslow's work!