A fifth volume was planned in Reilly & Britton's series of American poetry books. This was to have been Thanatopsis and Other Poems by William Cullen Bryant. Unfortunately, the series was discontinued before this book was published. John R. Neill had already completed the cover art and title page for this book, and I'm thrilled to have been able to acquire it. 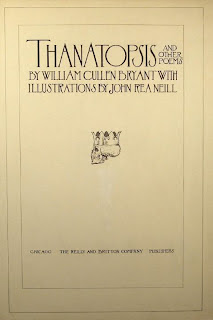 When printed, this cover would undoubtedly have had gold metallic ink added to the image - either in the background behind the head of the Sphinx, or perhaps in the outer border. Maybe both - who knows.

The title pages features a marvelously macabre skull, and is a good example of Neill's lettering skill - as is the cover, for that matter.

William Cullen Bryant is considered to be the first American poet to win international acclaim. He supposedly wrote the bulk of Thanatopsis ( a meditation on death) at the age of 16 or 17, around 1811. His work began to fall out of favor in the late 19th century, and he was further eclipsed by 20th century poets.
Posted by Bill Campbell

I am working on a short bibliography of the Neill Gift Book Series, as it was advertised, and I wandered a couple of things:

1) May I footnote a mention of Thanatopsis with you as the source? Also, are there any dates penciled in on the back of either of the drawings?

2) Have you ever seen the "Swiss Velvet Ooze" binding for Hiawatha? Evangeline is warm cinnamon and The Raven is green, but I have not seen Hiawatha.

Thanks for displaying all the neat stuff in your collection, Bill.

You're welcome to mention Thanatopsis - there are no dates or notes on the back of either board. I've only seen the "ooze" binding on Snowbound. If I ever run across a copy of Hiawatha, I'll let you know!