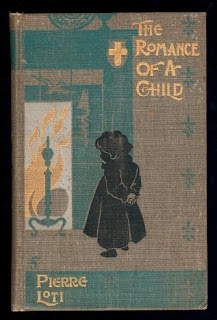 Before W.W. Denslow teamed up with L. Frank Baum to produce some of the most successful children's books of their time, he was a well regarded poster artist. He also designed a number of book covers for Rand McNally between 1896 and 1898. Many of these covers were like miniature posters themselves, colorful and eyecatching.

Denslow signed his work on these covers with his usual sea horse or hippocampus. I find it interesting that some of the books seem to have gone through several printings, and in a number of cases the seahorse was dropped in later states. A good example of this is Romance of a Child - the first printing, with a grey background is clearly marked with the hippocampus above the author's name. A later printing, in a new color scheme, has dropped the symbol. 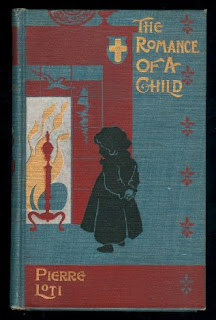 These covers were not simple stock images. In the case of this book, Denslow had clearly read the text as all the cover images relate to the story within - the child watching the fire, the religious reference of the cross, the fireplace tiles with motifs of sailing, etc.

Another example is Rosemary and Rue. I have two different versions of this binding (I'm afraid the gold lettering did not scan well on the tan version), and neither has the hippocampus symbol. I know of a third version, similar to the tan example but with a gold, rather than red, heart. This one is not signed either. Just another of those little publishing mysteries!