1909 brought The Road to Oz by L. Frank Baum. Here again, Reilly & Britton were producing an elaborate and attractive book. This time the book had a stamped cover, but the dustjacket had a different image showing Dorothy and friends, printed with a metallic gold background. The pages of the book were printed on various colors of paper. All of this was part of the "distinctive bookmaking features" Reilly & Britton advertised. Below, I show a 1920 printing of the book, after the stamped cover was replaced with a color plate using the dustjacket image. The gold metallic background was replaced with blue, which was later replaced with yellow. 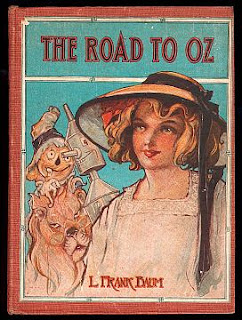 I have a small John R. Neill drawing that pictures a tramp who, with a little imagination, could be the Shaggy Man before he got so shaggy! This could be a magazine editorial illustration, ca. 1920 or so. The caption reads: The farmers wife who out of pity gives a good meal to a tramp is acting more wisely than the functionary who compells the tramp to earn his meal by hard labor. 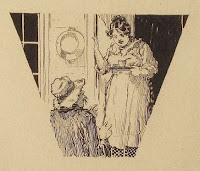 I remember reading an old Baum Bugle article that referred to this as the "most dangerous Oz book", due to the fact that Dorothy arrives in Oz after wandering off the farm with a strange man. Certainly not an example to set for children! Personally, I would think Aunt Em and Uncle Henry would keep a closer eye on her - she had already been swept away in a cyclone, blown off a ship at sea, and fallen down an earthquake. Clearly, she attracted trouble.
Posted by Bill Campbell