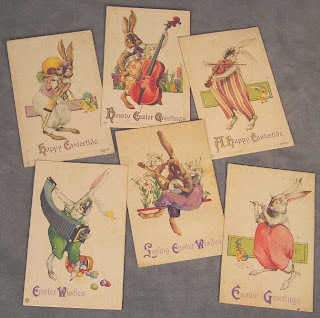 Here is a series of six Easter postcards produced by the Stecher Litho Co. around 1920, using John R. Neill illustrations of rabbit musicians. These pieces are not signed, which may indicate that the images were used without Neill’s knowledge.

Stecher Lithographic Company was developed by Frank A. Stecher, a native of Germany who came to Rochester, New York in 1870. Stecher Litho was developed from a printing company established in 1865, and I believe it still exists today as Stecher-Traung-Schmidt Company of Detroit. Aside from postcards the company produced nurserymen’s catalogs, fruit labels, cigar labels, picture books, etc. 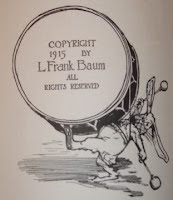 The rabbits seem to be a continuation of a subject the artist enjoyed. In 1915 Neill drew a rabbit drummer for the copyright page of The Scarecrow of Oz (see left - I wish this was the actual artwork!), and another group of musician rabbits was featured as the cover of the March 1916 Pictorial Review magazine. There is also a watercolor of yet another group of rabbit musicians in the collection of the Neill family. 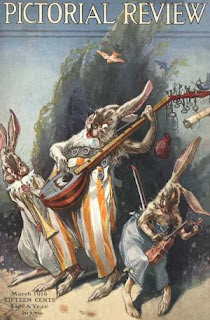 Nice to see all six of these - I only have three of them.

I think it unlikely that they were used without Neill's permission since they seem to be clearly created in postcard shape. And I think they are in the Neill checklist only because they are in Neill's account book.

I would have thought they dated from around 1916 when the bunny cover on PICTORIAL REVIEW came out. Interesting to see the 1920ish date. Is that from a Stecher catalogue? Just curious.

I agree that they certainly seem to be intended for this use, and they're definitely Neill rabbits. Michael Hearn was a little uncertain whether they were pirated or intentional, but if they're in the account book that would seem to settle that question. My date of 1920ish is going from the postmark dates on several of them - I've seen 1920, 1922 and 1924. Of course they could be earlier - I also would expect 1916 or so.