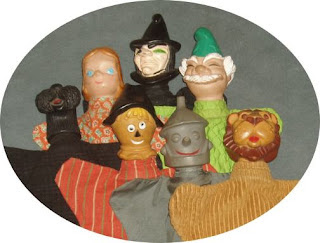 As a kid, I had a few Oz toys. My favorite by far was the set of hand puppets that was given away with detergent. These had vinyl heads with plastic sleeves for bodies. The sleeves would rip out very easily with extended play, and my mother would sew up much sturdier cloth bodies for the puppets. I'm still impressed by her fabric choices!

I also had the cardboard Emerald City theater that you had to mail away for, and which came with a play script. The theater is long gone, but I do still have the script - and it's one of the 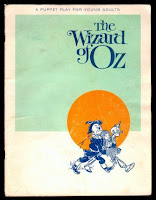 most insipid adaptations I've run across. Somehow, I never seem to have gotten the Good Witch puppet - I had two Dorothy puppets instead. By the way, the cover of the script was the first time I ever saw a Denslow illustration - I found it very odd, not at all what I was used to.

I also have the Off to See the Wizard hand puppet, with voice box. This is a toy that is really somewhat pointless - you couldn't do much with it, and the voice box was a big awkward lump, 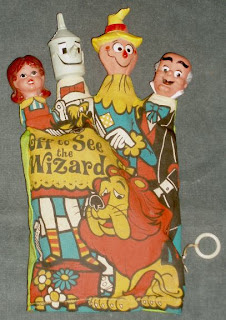 so it didn't see much use. The individual hand puppets were much better. Other things I remember having are a Colorforms set, some coloring books, and a set of Ozkins - all of which have vanished with time.
Posted by Bill Campbell