Dorothy and the Wizard 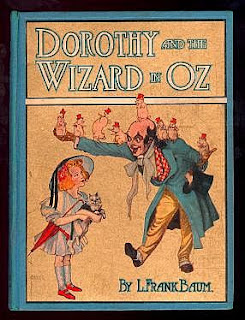 Dorothy and the Wizard in Oz was L. Frank Baum's Oz book for 1908. I've always thought that this was a very awkward title, and the story itself has never been a favorite.

The Oz books were always colorful, but here Reilly & Britton were aiming for more lavishness. This was the first book in the series to use metallic inks on the cover and spine, and to reproduce watercolors for the color plates. This was also the first Oz book to have a printed paper cover plate rather than a stamped cover design. Neill's illustration style has become more elaborate, leading up to the next year's book. Once again, I don't know of any artwork surviving from this title. 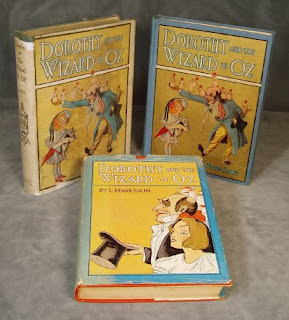 picture of Dorothy was dropped from the cover to make way for the words "Popular Edition", and even after the words were dropped she never made her way back again. This left a rather unbalanced and unattractive cover.

The third copy I show is from 1938 and was produced by Reilly & Lee for Sears Roebuck, to cash in on the upcoming 1939 film. The cover is a very uninspired adaptation of one of the color plates from the book, which were no longer in use, and the book was cheaply produced on inferior paper.
Posted by Bill Campbell