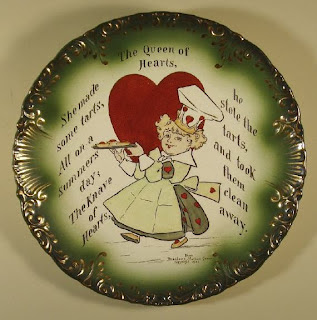 Denslow's Mother Goose was such a success, it even inspired a few dishes. The Haynes Pottery Company, of Baltimore Maryland created a pair of large plates and apparently a pitcher as well. I've never seen even a picture of the pitcher, but have a pair of the plates.

I'm very curious as to what image was used for the pitcher...maybe Jack & Jill?

I've also wondered if there were more pieces to the set. I've seen other Haynes Pottery pieces that use the same basic plates with the same borders, but have scenes from Dickens novels ( supposedly after C. D. Gibson, but they certainly don't look like it), or heads of Native Americans. Obviously, there were several series of these plates. 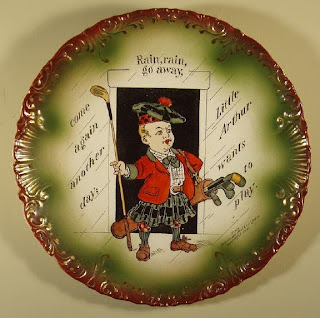 Hi Bill: Great site; thanks so much for all the wonderful Oz collectibles! Do you know what connection the set of Kindergarten Shoes Mother Goose postcards have to these plates and the Denslow book? I've seen the postcards listed in one catalog as by Denslow and in another as by a Denslow imitator. Expect the latter as they are not signed, although the images are similar, just changed in small ways. I have 4 out of 7 in the original set. Thanks!

I know that Denslow did several postcard sets, but I haven't heard of those particular ones. A number of illustrators during the time period were doing work that could easily be confused with Denslow, so it wouldn't surprise me to find they were done by someone else.

If anyone reading this knows otherwise, let us know!

I've done a little searching, and have now seen one of the postcards from this series - it's very interesting.

The card I've seen is for Rain, Rain, Go Away, and features the image of a golfer obviously based on the Denslow illustration from Mother Goose, the same image which is shown on one of the platters.

My initial reaction is that this is not by Denslow - as you mention, it isn't signed by him, but it does have the initials F.F. under the verse. It looks to me as though the person was trying to get as close as possible to the original Denslow image without actually copying it and getting into trouble - consequently, the small changes.

I'll have to keep an eye out for others from the series to see what they look like!

Yes, there is a Golfer one, and the ones I have show Queen of Hearts (very like your platter), Baa, Baa Black Sheep, Mistress Mary, and the Old Woman in a Shoe. One has a 1907 postmark, all w/ the "FF" initials on the verse. Schiller #355 has a brief mention of an advertisement with this theme; I'm not sure if they are referring to a postcard or an actual ad. And I think I saw them in another auction catalog w/ some other Denslow postcards, but can't find it at the moment!