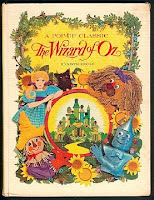 Here's another book that was a favorite of mine as a kid. I think this was the first version of The Wizard of Oz with actual pop-ups - the Julian Wehr edition had movement, but nothing actually rose from the page. I remember running across this book in a grocery store as a kid, and asking my mother to buy it. It's a simple but surprisingly faithful adaptation of the story, and includes a lot of proper details - silver shoes, separate visits to the wizard, etc. This was part of a series of pop-up books published by Random House, but I've never tried tracking down any other titles - I believe Pinocchio was one.

The book was published in 1968, and the artwork is very original with a strong 60's flair. I particularly like the bird's eye view of the cyclone lifting Dorothy's house - a clever idea. Of course, Kansas looks far more colorful than the bleak grey state describe in the story! 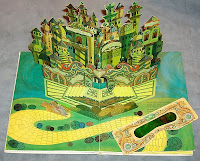 In 2000, Robert Sabuda created an extravagant pop up version of The Wizard of Oz, with images that literally burst from the pages. I still have a sneaking preference for this earlier, simpler 1960's version - probably because I had it as a child. However, Sabuda was clearly influenced by this edition, particularly in his Emerald City pop-up. He included green glasses, so that a secret message can be read - just as this book did!
Posted by Bill Campbell

Holy flashback Jack! I had a copy of that when I was a kid but I'd completely forgotten it until now! It was that tornado pop-up and the secret message in the Emerald City that jogged my memory.

I had this book as a kid too. Do you have any idea where I can buy it now?

The easiest place to look would be at www.abebooks.com. It isn't too terribly uncommon of a title. The publisher is Random House, and if you search by title and publisher with the keywords "pop up" you should turn up a few copies.