L. Frank Baum's Animal Fairy Tales was another series of short stories, originally published in The Delineator magazine, in 1905. These stories dealt with the animal kingdom, and the fairy legends of the animals.

These stories were not collected in book form until 1969, when they were published by The International Wizard of Oz Club, with illustrations by Dick Martin.

A later edition was published by Books of Wonder, using facsimiles of the original magazine pages with illustrations by Charles Livingston Bull. I've seen many pieces of Bull artwork offered over the years, but haven't run across anything from this series - I'd be curious to know whether any of these drawings survive. 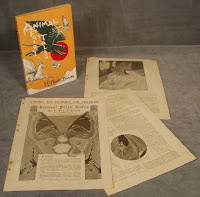 In 1953, Reilly & Lee published Jaglon and the Tiger Fairies, a re-written version of one of the stories, as a book with illustrations by Dale Ulrey. One of these days, I'll have to get a copy of that!
Posted by Bill Campbell

The Books of Wonder edition was published in 1989, I recall.