I collect a few different series of children's books, and it's interesting to compare the bindings of the Oz books with two British series from the same time period. The British titles are smaller in scale, and very elegant but lack some of the colorful exuberance of the Oz series. 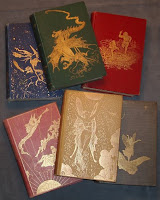 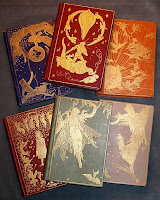 Many British children's books seem to favor red or blue cloth, with gilt stamping. In the case of the Andrew Lang Fairy Book series, the cloth color matches the title of the book - blue, red, green, on up to olive and lilac. The Story Books which go with the series are bound in blue or red, again with the wonderful pictorial gilt stamping. These are beautiful little books, and very rich with the extensive gilt on the covers and spine. Of course this series was ostensibly for children, but as it is a fine collection of folklore and fairy tales, it was collected by many adults as well. 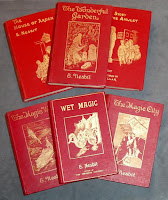 The books of E. Nesbit tend to be bound in red, though there are exceptions. Here again, the look is very uniform, without the variety seen in the Oz bindings. In comparison, the Oz books are large and bold, and in my mind exactly what a child would want! Perhaps Lewis Carroll was right, when he rejected the first printing of The Nursery Alice, claiming that the printing of the color illustrations was too gaudy but would be fine for Americans.