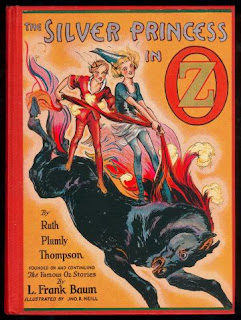 The Silver Princess in Oz, from 1938, was the second to last Oz book written by Ruth Plumly Thompson for Reilly & Lee. She also published King Kojo this year, possibly looking for an alternative to the Oz series as she was getting tired of working with Reilly & Lee - after all, this was her 18th Oz book, four more than L. Frank Baum had written.

The story veers towards science fiction, as the Silver Princess herself is from another planet - or to be more precise, Anuther Planet. Of course, magic in Oz has always had a technological bent, so this blends in very nicely.

Since color plates were no longer in use, John R. Neill had found another way to create memorable images; in the final Oz books he illustrated, he used a few double page spreads for effect. 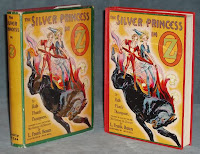 The first editions of this book used metallic silver ink in the title on the cover and dust jacket - a nice touch, and something that hadn't been done since The Sea Fairies in 1911. The spine of the dust jacket on this book, as well as the previous title Handy Mandy, dispenses with the small image of the main character's head that had been present on all previous Thompson titles.

I always thought it was a little odd that Handy Mandy's head was used on the spine of the book itself - when the International Wizard of Oz Club published their reprint edition of this title in 1990, they corrected that error with an image of the princess on the spine of both the book and the dust jacket.
Posted by Bill Campbell