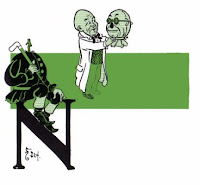 L. Frank Baum's early Oz stories contain an amazing quantity of removable heads. Here are a few examples, off the top of my head...

In Wonderful Wizard, the Scarecrow's head is removed in order to put his new brains in the right place - and of course, the Wizard appears to Dorothy as a giant head! 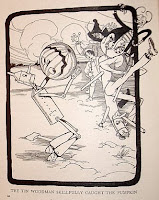 In Marvelous Land, Jack Pumpkinhead loses his head a few times, and is constantly worried whether it might spoil.

In Ozma, Princess Langwidere has a head for every day of the month and threatens Dorothy with a head exchange. 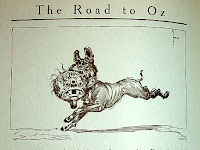 Road to Oz introduces the Scoodlers, who throw their heads at their enemies. Also, Button Bright and The Shaggy Man are given replacement fox and donkey heads for a while.

In Emerald City, one of the groups of villains are the Whimsies, who wear large cardboard heads over their own tiny heads.

The theme pops up in non-Oz stories as well - in A New Wonderland, the King of Phunniland loses his head and is forced to try new heads of various materials before regaining his original. 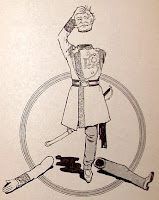 In John Dough, the General who goes to pieces lost his head at Santiago and had it replaced with wax - but the female executioner is stymied when she is unable to cut the head from a wooden cigar store Indian.

One of the most memorable moments in the series is the discovery by the Tin Woodman of his former head, in a cupboard, in The Tin Woodman of Oz. The Tin Woodman was originally made of flesh and bone, but slowly cut himself to pieces with an enchanted ax, visiting a local tinsmith after every accident to replace each missing part. The tinsmith kept all the pieces, and when a similar fate befell another character, a soldier, the tinsmith used the various body pieces of both men to create a new man. Since he only needed one head, the spare was kept in a cupboard in his shop. This whole concept is very intriguing.
Posted by Bill Campbell

I wonder if the giant disembodied head which the Wizard uses in one of his appearances in "The Wonderful Wizard of Oz" would also fit into this category.

I do make a brief mention of the giant head - I think it definitely fits in the category!