Ozoplaning with the Wizard 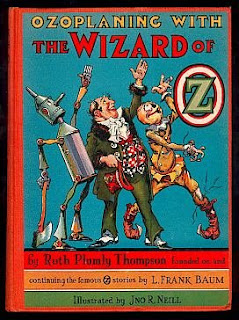 Ozoplaning with the Wizard of Oz was published in 1939, and ended Ruth Plumly Thompson's run of Oz books for Reilly & Lee. As this was the year of the MGM movie, an attempt was made to benefit from the publicity surrounding the film.

The cover is interestingly generic, and was designed with the Wizard, Scarecrow, and Tin Woodman prominently featured. The title The Wizard of Oz appears in large letters - Ozoplaning With is almost an afterthought.

The Oz characters of the story are all pulled from those present in the first book - but rather than using the more familiar characters, primary roles were given to Jellia Jamb and the Soldier with the Green Whiskers. It's nice to see these secondary figures on an adventure of their own. Hungry Tiger Press has recently published a new edition of this title.

Thompson would write two more Oz titles. In the 1970's The International Wizard of Oz Club printed Yankee in Oz, and The Enchanted Island of Oz, both with illustrations by Dick Martin. New editions of both of these books are currently available from the club.