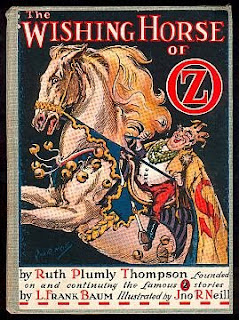 The Wishing Horse of Oz, from 1935, was the last Oz title issued with color plates. It's a shame that the color illustrations were dropped from later books, but this was the Depression and I'm sure costs needed to be cut. Ruth Plumly Thompson also thought it was unfortunate that the plates were discontinued, but at this point she was unhappy about several aspects of the Oz series, particularly Reilly & Lee's lack of promotion of the books.

John R. Neill drew a horse, way back in his Nip & Tuck comic page of 1909, that looks very similar to the cover of this book. Of course, Neill drew a great many horses over his career, so it's not too surprising that some should resemble each other!

The white dustjacket for this book almost slips back to the former style of jacket, less colorful than the past several books. But this does make it stand out from other titles on the shelf!
Posted by Bill Campbell