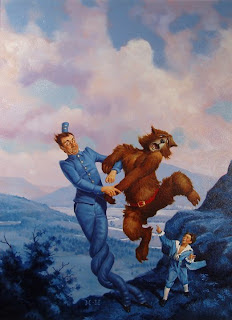 The Del Rey cover for Ojo in Oz, by Michael Herring, is a lovely study in blues. We're obviously in the Munchkin Country, where blue is preferred. This certainly makes Snufferbux, the brown bear, stand out! The man with the twisty legs is the Elevator Man, who plays an important part in the climax of the plot.

Snufferbux is taken directly from a John R. Neill illustration of the character. However, Herring has once again created a much more finished scene as well as adding his own touch to X. Pando, the Elevator Man. 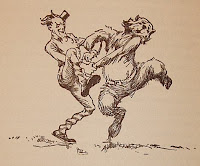 At 18" by 24", this cover painting is a little smaller than most of the previous Ruth Plumly Thompson covers. In the cropping of the printed version, Ojo almost doesn't make it onto the cover!
Posted by Bill Campbell