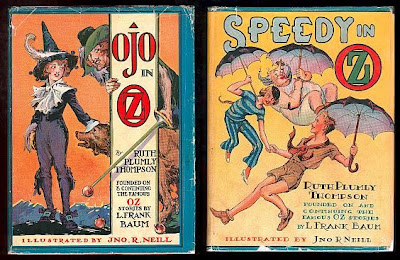 Here are two more titles by Ruth Plumly Thompson, Ojo in Oz from 1933 and Speedy in Oz from 1934.
Ojo fills in the back story of a character first introduced by L. Frank Baum in 1913, in The Patchwork Girl of Oz, while Speedy continues the adventures of one of Thompson's boy heroes.

In Ojo, Thompson is working hard to fill in gaps of Ozian history left by Baum. Several of her books serve this purpose, some more successfully than others. This book takes an underused character and gives him some new adventures, which is always fun.

I like John R. Neill's endpaper illustrations, featuring some very fanciful gypsy caravans, and I also think the color plates in this book are particularly nice.

With Speedy, Thompson is writing almost entirely for her own original characters, and stays away from Oz for much of the book - most of the story takes place in the air. The Emerald City and traditional characters don't appear until the final two chapters. I do think Terrybubble, the living dinosaur skeleton, is a worthy addition to the Oz inhabitants!