In 1908, Reilly & Britton published a popular series of small books called Children's Stories That Never Grow Old, with illustrations by John R. Neill; I believe the Neill illustrations for this series were originally done for the Philadelphia North American newspaper. These individual books were published in a couple of formats, and as The Children's Red Books they were printed two to a volume - I've pictured a couple different binding examples. They continued to be published by Reilly & Lee into the 1920's, with new cover designs. 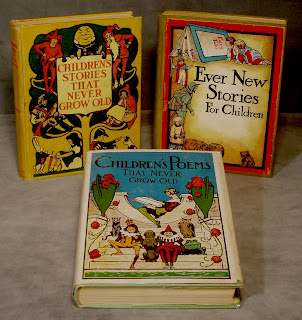 A compilation of these stories was published in 1908 under the title Children's Stories That Never Grow Old. In 1916, another book was published called Ever New Stories for Children, containing the titles which were not used in the first volume. Then, in 1922, Reilly & Lee published Children's Poems That Never Grow Old, obviously intending to tie into the popular series. John R Neill created 8 new illustrations for the book, which were printed as color plates. 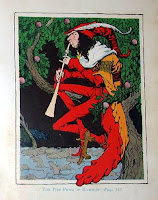 I have a copy of Children's Stories That Never Grow Old which was published by The Musson Book Company of Toronto. I find this interesting, as Reilly & Britton worked with the Copp, Clark Company for the Canadian editions of the Oz books and other titles. It strikes me as odd that they would use a different publisher for this book.
Posted by Bill Campbell

There is a 1st edition of "Fate of a Crown" which is issued by McClellan & Stewart, Toronto, which surprised me when I first got it...I also assumed Copp Clark was the sole Canadian publisher for R&B's authors, but apparently not. I still haven't heard of a "Daughter's of Destiny" with the McClellan imprint, but I wouldn't be surprised

Interesting... I think McClelland $ Stewart were also the publishers of the Canadian edition of "The Wizard of Oz", with illustrations by Evelyn Copelman.

I have "Rab And His Friends." It's the same one I found on the ground that I mentioned in a comment sometime back. I don't care too much for the stories, but Neill was a great artist, and there's plenty of illustrations, so that makes up for it. Plus, there's advertisements for the Oz books up to "The Road to Oz," the Twinkle Tales, and the Christmas Stocking series in the back. The back matter is fun for Baum enthusiasts like me.

I agree, I don't particularly care for those two stories either - they're definitely two of the lesser known titles in the series, but must have been popular in their day. Most of the stories are still well known today.

I have a really rough copy of "Children's Stories That Never Grow Old," and I mean really rough. It only has about 85% of the pages left. Still worth it just for Neill's illustrations. I bought it at an Oz Club convention years ago. Now its mainly worthwhile when I've had conversations with friends about how prevalent ethnic stereotypes were in children's literature 100 years ago. While Neill's illustrations in the Oz books occasionally bordered on offensive, in "Stories That Never Grow Old," at least to modern eyes, he goes fully over the line.