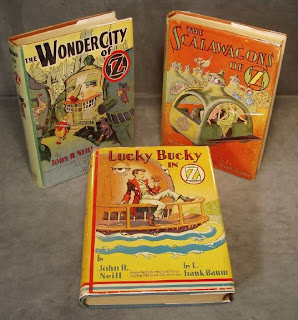 After Ruth Plumly Thompson left the Oz series, John R. Neill stepped up to continue writing, as well as illustrating, the stories. As much as I admire his artwork, I have to confess that his stories don't do a whole lot for me.

His first, The Wonder City of Oz, was heavily rewritten and edited by the publishers. Much of the artwork for this title does survive. The following two, The Scalawagons of Oz and Lucky Bucky in Oz, were kept much closer to his intentions. I know the cover drawing and color sketch survive from Lucky Bucky - I don't know of any other pieces.

Neill planned a fourth title, The Runaway in Oz, but did not live to see it published. This missing Oz title was finally published by Books of Wonder in 1995, with editing and illustrations by Eric Shanower - my favorite among contemporary Oz illustrators.
Posted by Bill Campbell