Reilly & Britton published two volumes of compilations of work by L. Frank Baum. Actually, they were both the same book simply reprinted with a new title - it's amazing how many times they could do that!

The first time around in 1910, the book had the descriptive but unwieldy title L. Frank Baum's Juvenile Speaker. Speakers were popular at the time, as books of short pieces that children could use for recitations. A couple years later, in 1912, it was re-published with the catchier title of Baum's Own Book for Children. 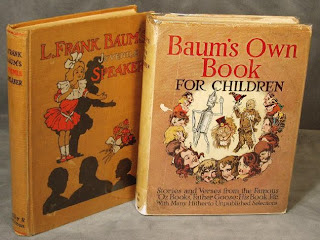 I've never considered either version a particularly exciting book, as it contains nothing really new - there are some modifications to chapters from Oz books, designed to make them read as complete stories on their own, and there is a play adaptation of The Enchanted Island of Yew. But overall, I don't find either copy a very attractive book. There are no color illustrations, or pictorial endpapers, and the covers are a bit dull. Both are difficult to come by today - particularly the Juvenile Speaker.
Posted by Bill Campbell

Were there any new illustrations?

There were no new illustrations - drawings by John R. Neill and Maginel Wright Enright, from previous Baum titles, were used.