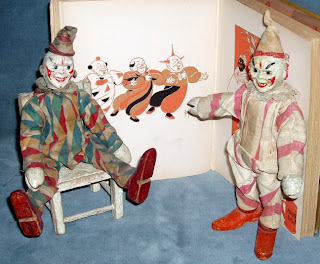 This may be stretching my topic a bit, but something else I collect are toy clowns from the Schoenhut Circus. The Schoenhut company was based in Philadelphia, and made many toys and dolls, but the circus is one of their best known products.

My reason for mentioning this is that the clowns really make me think of W. W. Denslow's clowns in Dot & Tot of Merryland. The book was published in 1901, and Schoenhut began making the circus toys in 1903. I don't really think that one influenced the other, but who knows - it's always a possibility!

The clowns tend to be found in various states of decrepitude - I usually call them the evil clowns, because they tend to look pretty scary. But they are great toys, and very fun to play with!
Posted by Bill Campbell

This may ALSO be stretching things a bit, but the Schoenhut toy clowns remind me of Perky Puppet, the toy clown whose open letters to children appeared in Jack and Jill Magazine, and were written by Ruth Plumly Thompson. I read Perky Puppet as a kid in the 1960s, not knowing that Thompson wrote them.

I believe that both Thompson and Jack and Jill Magazine (back when it was published by Curtis Publishing) were based in Philadelphia, like the Schoenhut Circus. Coincidence?

Creepy! But cool I gotta say.

I'm not familiar with Perky Puppet, I'll have to look into that! Of course the clowns have a pretty classic look to them, so it's not too surprising that they should resemble other clowns - but still, it's fun to try to connect them. As it happens, I mentioned that there seems to be a Philadelphia connection to Oz in today's post - it does keep popping up! (Denslow, Neill, Thompson...)I'm originally from the Philadelphia area myself, so I might be a bit partial...