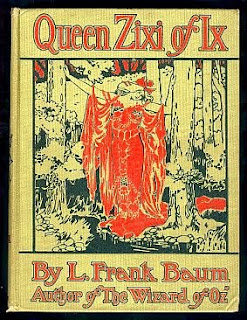 Queen Zixi of Ix is L. Frank Baum's most traditional fairy tale. This story was first published as a serial in St Nicholas Magazine in 1905. The magazine used color printing for the first time for this story, which helps show how important the publishers felt this tale was.

I have the magazine version of the story, bound in the decorative volumes that were produced twice a year compiling the magazine contents. This is nice to have, since there is an illustration used in the magazine that was not put into the book - I'm not sure why, maybe due to lack of space when the type was reset. The Dover paperback edition of the book restored the missing drawing to the story. 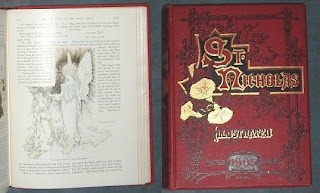 I have seen one original drawing from this book, so I imagine there may be a few others as well. Frederick Richardson was a well known illustrator with many titles to his credit.
Posted by Bill Campbell

I love "Queen Zixi of Ix." Edward Wagenknecht was right on the money when he called it one of the best fairy tales ever written. Fredrick Richardson's pictures are excellent. In fact, I even like his Zixi better than the picture Neill drew in "Road."

It's too bad that Dover stopped publishing their non-Oz Baum books. (Shame on them.)

I like Richardson's illustrations too - a number of them are very stage-y, almost like tableaus, but work very well for the story.