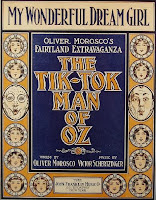 There is quite a bit of pre-1920 sheet music related to the Oz stories. The 1902 musical extravaganza of The Wizard of Oz had many songs, some with lyrics by L. Frank Baum, others that were interpolated into the plot during the show's lengthy run on Broadway. The Wogglebug (1905) failed as a show, but sheet music was produced. The Tik-Tok Man of Oz (1913)was a moderate hit, and also produced a number of song sheets. 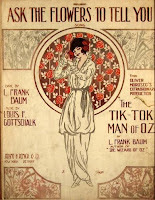 I have a few examples from Tik-Tok, and hope to eventually get a few pieces from the other shows as well.

In the photo below, there are also some examples of music inspired by Father Goose, His Book. The copy of The Songs of Father Goose is a reprint from approximately 1920 of a book originally published in 1901 - a different cover by W. W. Denslow was used on this edition. There are also two 1901 newspaper supplements with songs from the book. 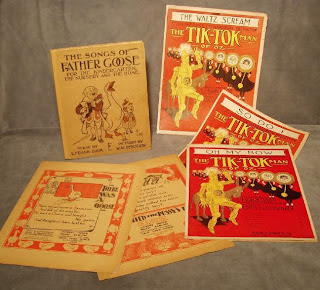