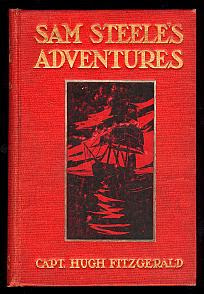 The Sam Steele series only lasted for two books. This was to be L. Frank Baum's series for teen boys, just as the Aunt Jane's were for teen girls - this time his pseudonym was Capt. Hugh Fitzgerald. The first title was similar in size and style to the first book in the Aunt Jane's Nieces series - in both cases a fairly plain binding with a paper label.

Apparently the book didn't catch on, and the binding was changed for a new edition - a slightly larger book, with a stamped cover illustration and the more descriptive title, Sam Steele's Adventures on Land and Sea. This was followed by Sam Steele's Adventures in Panama, which was bound in a similar style. This second book is very difficult to find!

The series still was not selling well, so Reilly & Britton decided to try a different tack. They re-published these two books as the first titles in the Boy Fortune Hunters series, giving Baum yet another pseudonym - this time Floyd Akers. This series sold well enough to add four more titles. Hungry Tiger Press is currently reprinting the Sam Steele books, as well as a number of other pseudonymous Baum books.