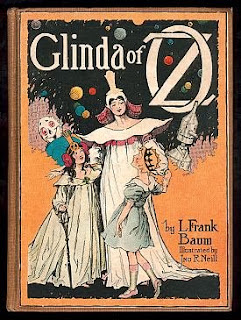 Glinda of Oz was the last Oz book by L. Frank Baum. It was published in 1920, and contained a note from the publishers telling of Baum's death (which had occurred the previous year), and stating that notes had been left behind for another Oz story. This last part doesn't seem to have been true - at least, the next book in the series was not based on any notes left by Baum.

I always liked this book, but it felt very different to me than the other Baum titles in the series. I never could decide why, since it does feature many familiar elements. It might simply have been the fact that Ozma and Dorothy are off on an adventure of their own, something that had not happened in any of the previous books. 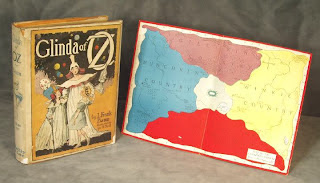 The map of Oz that had been used as endpapers in Tik-Tok of Oz was distributed with the Oz books of 1920. There was one change to the map - the compass points for east and west, which had been reversed on the original map, are now in their customary positions. This firmly places the Munchkins in the west, and the Winkies in the east - all very confusing! On the reverse side was the flag of Oz - there was an interesting article in the Baum Bugle years ago about Oz flags - there are quite a few different ones described in the books.