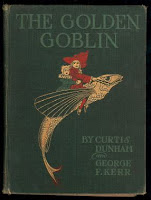 A couple days ago I mentioned The Golden Goblin, in some comments after the posting for Zauberlinda. This is another title that is sometimes referred to as an imitation of L. Frank Baum's Oz books. It was published by Bobbs Merrill in 1906.

Visually, the book uses a number of two-color illustrations, along with single-color page decorations under the text. There are also full color plates, and the ink color of the text illustrations changes throughout the book. This is all reminiscent of The Wonderful Wizard, but doesn't serve the same purpose. In Baum's book, the color shifts relate to the story, whereas here they simply add variety. The illustrations by George Kerr are reminiscent of Frederick Richardson's work for Queen Zixi of Ix. Kerr also illustrated the 1908 Bobbs Merrill edition of Baum's American Fairy Tales. 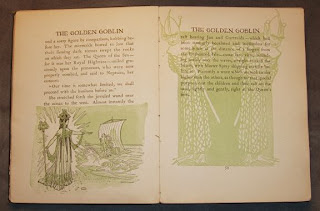 The story itself concerns two castaway children who are picked up by the Flying Dutchman and have several adventures. Obviously, this isn't quite the same Flying Dutchman as seen in Pirates of the Caribbean! I don't find the story all that captivating, and it clearly seems to be intended to be transformed into another Broadway extravaganza, just like The Wizard. A number of children's books seem to have been written at this time period for that purpose - similar to the books written today in hopes of being made into blockbuster movies!
Posted by Bill Campbell

Ooh, thanks for posting this! I'd been able to find some images of the cover online but hadn't been able to see any of the interior pages.

After mentioning it, I figured it was silly not to show a picture. Some other titles I've remembered that get mentioned as falling into the Oz-like category are Yama Yama Land, The King of Gee Whiz, Prince Silverwings, and Peter Pumpkin in Wonderland...and I'm sure there are others.