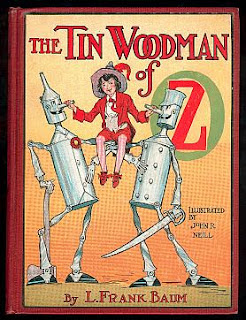 The Tin Woodman of Oz was the last Oz book published by Reilly & Britton. The firm changed its name to Reilly & Lee in 1919, and the rest of the official Oz series was published under this name. This was also the last Oz title published in L. Frank Baum's lifetime. Two more Baum titles were published, but both were posthumous - Baum died in 1919, before the publication of The Magic of Oz.

On more than one occasion I've seen this title listed on eBay, describing the cover as two tin men lifting Dorothy - I think Woot the Wanderer would be very insulted! As a kid I never really liked the idea of Captain Fyter, the Tin Soldier character - I didn't think there should be two tin men. 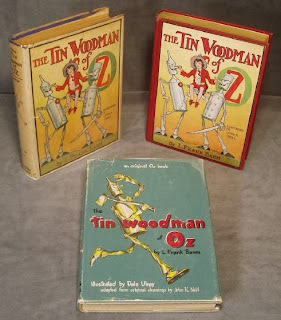 In the photo at right, I show a 1920 printing in dustjacket, and a copy of the 1955 version with new illustrations by Dale Ulrey. This was the first Oz book she illustrated, as part of an experiment in updating the series, followed by The Wizard of Oz, and the unpublished Ozma of Oz.
Posted by Bill Campbell