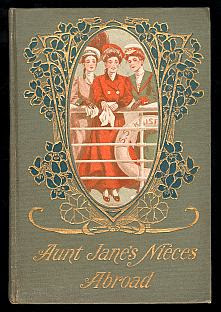 The floral stamping used on the Aunt Jane's Nieces series was designed by Decorative Designers, a New York based firm founded by Henry Thayer that was in business from 1895 to 1931 and created designs for many publishers. A number of designers worked for this firm, but apparently most of the decorative borders of this sort were designed by Emma Redington Lee Thayer. According to the website Publishers' Bindings Online, the firm's monogram, a pair of overlapped D's with the second D reversed, appeared on over 25,000 book covers, dustjackets and text decorations.

When Reilly & Britton adjusted the size of the Aunt Jane books, the design had to be modified - a few violets and the ends of the ribbons were removed. It's interesting to note that the company was still using this original design in their advertising for the series - the ad below illustrates Aunt Jane's Nieces and Uncle John in this binding, even though it was no longer in use. 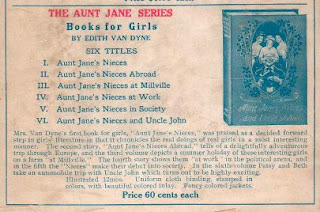 Reilly & Britton clearly made additional use of the firm, as the cover for Sam Steele in Panama is also marked with the Decorative Designers device - it's hard to see, but it's next to the palm tree on the right. Apparently
figurative covers like this were designed by Charles Buckles Falls or Jay Chambers. I don't see the firm's mark on the secondary binding of Sam Steele's Adventures on Land and Sea, which

is interesting - I would think that this would also have been designed by the company, since it matches the general design of Panama.

After doing a little more searching, it appears that not all of the work done by Decorative Designers was signed - so it's very possible that the Land and Sea binding was also designed by the firm. The Young Research Library of UC Los Angeles has an archive of materials relating to Decorative Designers and Lee Thayer. They also list a dummy copy of Sweethearts Always, a book of poetry published by Reilly & Britton that contains a poem by L. Frank Baum.
Posted by Bill Campbell