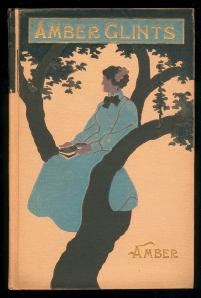 Here are a pair of Rand McNally novels with similar cover themes, by W. W. Denslow.

Amber Glints is a compilation of writings by Martha Everts Holden, who wrote special features for the Chicago Herald under the name of Amber. According to the Greene/Hearn biography of Denslow, she hosted the Bohemian Club, an informal gathering of artists on Tuesday nights in Chicago. She was also Denslow's future mother-in-law, as he married her daughter Ann Waters. Unfortunately, Amber died before the marriage and this book was published after her death. A second volume which I showed in an earlier post, Rosemary and Rue, was also published.

I haven't read Told in the Rockies yet, so I really don't have a clue to the story - other than I suppose it takes place in the Rockies! But the silhouette of the girl on the rock is similar to the woman in the tree of Amber Glints. Both are simple covers, and don't reveal much of the content of either book.
Posted by Bill Campbell

Hi: I have a copy of Amber Glints and noticed it is actually copyright W W Denslow, which is interesting. Most seem to be just Rand McNally. Also, do you know how many covers were originally signed w/ Denslow's hippocampus? Because none of the ones I have are, but you indicated that might mean they are later printings. Thanks!

Denslow does seem to have held the copyright on Amber Glints - which would make sense as it was a collection of pieces written by his mother-in-law.

I don't know how many Rand McNally covers were signed by Denslow - the Greene/Hearn biography lists 51 hardcover titles, as well as a number of paperbacks. He also did titles for other publishers. I know that's not a complete list, as the atlas I've shown is not among the titles listed. Also, just because a book is on the list, it doesn't guarantee a Denslow cover. I've seen several of the titles on the list in editions with other covers, still from roughly the same time period.

Since I've seen copies of the same title both with and without the signature, I'm assuming it was dropped on some later printings - I don't know why, it seems like a pointless thing to do. Some titles might never have had the signature, but that's difficult to say, as another signed copy might turn up.

I'm posting another title today that I think has a Denslow cover, but I'm not completely certain as it isn't signed. Overall, it's a tricky area - the best assurance of a Denslow cover is still the signature.

This was posted today under a different blog entry - I've copied and pasted it here as it pertains to this title.

Thanks! What fun to hear from a relative of the author.