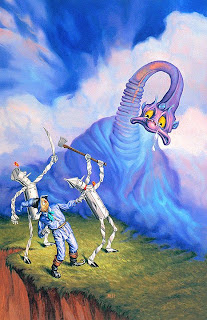 Once again, Michael Herring has fleshed out an illustration by John R. Neill to make the cover of the Del Rey edition of The Tin Woodman of Oz. The fantastic creature, (called a Hip-po-gy-raf), is a straightforward rendition of the Neill drawing, except in color. However, as with the Scarecrow cover, Herring has added a greater sense of drama with the creature appearing out of the mist, and the characters preparing to do battle on the edge of the cliff. Of course, no harm is done to anyone in the story, and the Hip-po-gy-raf turns out to be rather helpful.

The painting has a wonderful mix of color, with very vibrant blues and lavenders. In cropping the image for the cover of the book, the cliff edge is almost lost - removing some of the drama of the image.

Beautiful! The image has so much more power in the larger size.

These cover images almost all benefit from not being cropped, as they were for use on the books. There are some that become a bit unbalanced due to space left open for the book title, but even then they feel more complete.